An ischemic stroke occurs when a blood vessel that supplies the brain becomes blocked or clogged. 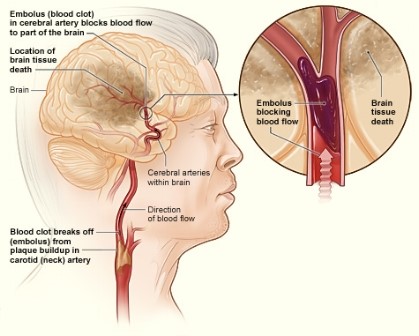 An ischemic stroke occurs when a blood vessel that supplies the brain becomes blocked or “clogged” and stops blood from getting to that part of the brain.  Brain cells and tissues begin to die from lack of oxygen and nutrients.  The following are types of ischemic strokes:

Caused by an a blood clot that forms elsewhere in the body (often in the heart) and travels through the bloodstream to the brain.

Caused by a blood clot that forms in the arteries going to the brain.

When there is a blockage in one of the brain’s larger arteries (for example, carotid artery or middle cerebral artery) that supply blood to the brain.

When one of the smaller arteries in the brain becomes blocked.